The Mid-Month Mirth Memo is a short amusing tidbit to brighten middle of the month monotony.  It is brought to you by best-selling author, award-winning speaker, "Jollytologist" ® Allen Klein www.allenklein.com

THANKFUL THOUGHT OF THE MONTH:
(In honor of Thanksgiving)
Everyday I am thankful for something in my life. 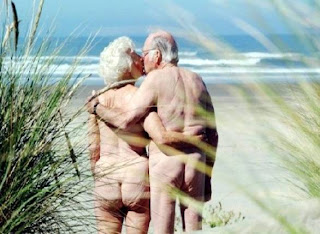 Today I'm thankful that the photographer was not standing on the other side.
SIGN OF THE MONTH:
(In honor of Social Media)
"In case of fire, exit building before TWEETING about it."
JOKE OF THE MONTH:
(In honor of National Hospice Month)
A very old man lay dying in his bed. In death’s doorway, he suddenly smelled the aroma of his favorite chocolate chip cookie wafting up the stairs.
He gathered his remaining strength and lifted himself from the bed. Leaning against the wall, he slowly made his way out of the bedroom, and with even greater effort forced himself down the stairs, gripping the railing with both hands.
With labored breath, he leaned against the door frame, gazing into the kitchen.  Were it not for death’s agony, he would have thought himself already in heaven.
There, spread out on newspapers on the kitchen table, were literally hundreds of his favorite chocolate chip cookies.
Was it heaven? Or was it one final act of heroic love from his devoted wife, seeing to it that he left this world a happy man?
Mustering one great final effort, he threw himself toward the table. The aged and withered hand, shaking, made its way to a cookie at the edge of the table, when he was suddenly smacked with a spatula by his wife.
“Stay away from those,” she said. “They’re for the funeral!”
BOOK OF THE MONTH:

(To you deal with holiday stress)
The Healing Power of Humor: Techniques for Getting through Loss, Setbacks, Upsets, Disappointments, Difficulties, Trials, Tribulations, and All That Not-So-Funny Stuff
http://www.allenklein.com/healing.htm 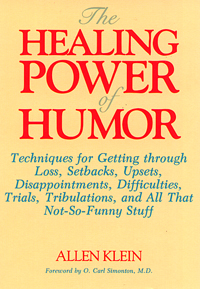