Make it a Red Nose Day

I am a big fan of a little red sponge-rubber ball known as a “clown nose.” It is near impossible not to smile when you either see someone wearing one or when you are wearing one yourself.

Over the past twenty years, I have given an envelope with a clown nose in it to everyone in my workshops and keynote speeches. I then ask them to close their eyes and think about something that is upsetting them. After a minute-or-so, I ask them to open the packet, put on the clown nose, and look about the room.

The smiles and laughter flood the room as the upsets they recall disappear. In addition, I ask the audience to take the clown nose home and use it in stressful situations. The tales that have come back are amazing.

One mother, for example, told me that she wears one when trying to get her kids out of bed on school mornings. It starts the day off on a happy note.

Another couple told me they plant clown noses all around the house and put them on as a signal to head off an impending fight. For them, it is like an instant red light to stop what might turn into a heated argument.

And, I personally saw the power of a red clown nose one day when my flight was three-hours late in taking off. I gave one to the flight attendant who was greeting people as they entered the aircraft. Most of the passengers were grumpy and unresponsive when she smiled and said “hello.” But when she put on the clown nose many of the passengers smiled and lit up. Interestingly, there were a few people who immediately turned away preferring to hang on to their anger.

If you don’t have your own personal red clown nose, I highly recommend you get one. Keep it handy when you are in traffic jams, at staff meetings when things get bogged down, or put one on to fend off arguments before they even get started.

And, if you are too embarrassed to wear a clown nose in public, wear one privately. To start each morning in a fun way, put on the nose, look in the mirror, and say out loud, “This person is not to be taken seriously.”

Originally published on Examiner.com on March 7, 2013
Posted by Allen at 9:38 AM No comments:

Lengthen Your Life with Laughter

According to researchers at the Albert Einstein College of Medicine and Yeshiva University, people who are optimistic, laugh a lot and are easygoing, may live longer.

These people were part of a bigger study, called the Longevity Genes Project that examined 500 Ashkenazi Jews ages 95 and older as well as 700 of their offspring.

Dr. Nir Barzilai, director of Einstein's Institute for Aging Research said that "When I started working with centenarians, I thought we'd find that they survived so long in part because they were mean and ornery. But when we assessed the personalities of these 243 centenarians, we found qualities that clearly reflect a positive attitude towards life.”

Most of those examined, said Dr. Barzilai, “considered laughter an important part of life and had a large social network. They expressed emotions openly rather than bottling them up."

And in another larger study by Sven Svebak, at the Norwegian University of Science and Technology, 54,000 people were tracked for seven years. What Svebak found was that those who have a sense of humor outlived those who don’t.

In addition, the survival edge was particularly large for people who had cancer. The patients with a good sense of humor cut their  chances of dying by about 70% compared with adults with a poor sense of humor.

So, once again science is documenting what the Bible told us many moons ago that “A merry heart doeith good like a medicine.”

QUESTION OF THE MONTH:
You are on a horse, galloping at a constant speed. On your right side is a sharp drop off. And on your left side is an elephant traveling at the same speed as you. Directly in front of you is another galloping horse but your horse is unable to overtake it. Behind you is a lion running at the same speed as you and the horse in front of you.  What must you do to safely get out of this highly dangerous situation?
ANSWER:
Get your drunk ass off the merry-go-round.


STORY OF THE MONTH:
Just before the school year started, a high school teacher injured his back. He had to wear a plaster cast on the upper part of his body but it was under his shirt and not noticeable.  On the first day of class, he found himself assigned to the toughest students in the school. Knowing that they would be testing him, he walked into the rowdy classroom, opened the window wide and sat down at his desk. When a strong breeze made his tie flap, he picked up a stapler and stapled the tie to his chest.  Dead silence... the rest of the year went extremely well.

JOKE OF THE MONTH:
Recently, a guy came into my office with an unusual problem. He was
frightened of nickels, dimes, and quarters. I knew immediately what
was going on.

He was afraid of change.


PROMOTION OF THE MONTH:
Know a therapist or counselor?  Then tell 'em about...
L.A.U.G.H.: Using Humor & Play to Help Clients Cope with Stress,
Anger, Frustration, and more.
Includes 60 reproducible activities and CD.
http://tinyurl.com/n7ujxxp 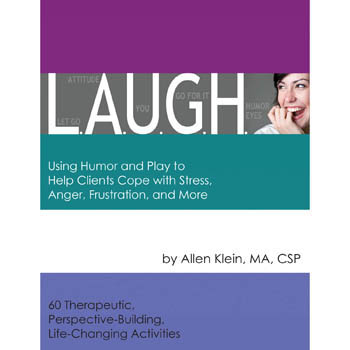