You Can't Ruin My Day

One of the most important lessons I’ve learned in my life is that I can rise above any situation; that I don’t have to let my circumstances rob me of my joyous spirit; that I can take back my power and not let any person or thing ruin my day, or, for that matter, my life.

Looking back, I realize that I learned that lesson at an early age. When I was seven-years-old, my parents took me to see both Broadway musicals, Carousel and Oklahoma. From that day on I wanted to be the person who created “the pretty stage pictures.” I wanted to be a scenic designer.

We arrived late for one of the shows and missed the beginning. So when the show was over, I refused to leave. I thought that, like a movie, I could see the beginning again. That day I was dragged out of the theater kicking and screaming, but my heart never left the theater.

In grade school, I took shoeboxes and made a scene from the book that we were reading in class. Other students wrote book reports; I did dioramas. In high school, I saw almost every Broadway show, including the opening night of Hello Dolly. In college, I designed many of the school productions and, with the help of one of the professors, got into Yale Drama School.

It was a three-year master’s degree program. They admitted twelve students the first year. Then, because they only produced eight plays in their smaller theater the second year, they let go of four designers. I was one of the first to go. I was told I had no talent.

Soon after being booted from Yale, I became an apprentice in the scenic design union in New York City and finally became a full-fledged designer at CBS – television. My fellow classmates at Yale were still designing school productions while I was designing national television shows such as Captain Kangaroo, The Merv Griffin Show, and The Jackie Gleason Show.

Who said I had no talent? Who said I would never be a scenic designer? Nobody was going to ruin my day or my dream. Not even the head of the Yale School of Drama scenic design department.

More recently, that lesson was presented to me again, when I got a speeding ticket. In spite of that, I continued to be joyous that day and continued to repeat my mantra whenever not-so-wonderful stuff happens to me: “No one, or nothing, can ruin my day.”
Posted by Allen at 8:53 PM No comments:

THOUGHT OF THE MONTH:
I think it is just terrible and disgusting how everyone has treated Lance
Armstrong, especially after what he achieved, winning seven Tour de France
Races, while on drugs. When I was on drugs, I couldn't even find my bike.
-Anonymous


GREAT NEWS OF THE MONTH:
I'm marching in the Macy's Thanksgiving Day Parade this year.
I'll be escorting the Marion-Carole Showboat float. When you
see me on TV, wave and I'll wave back.

NEW BOOK OF THE MONTH:
Just in time for holiday gift-giving. Always Look on the Bright Side.
500 uplifting quotations to help you celebrate each day to the fullest.
http://www.allenklein.com/look-on-the-bright-side.htm 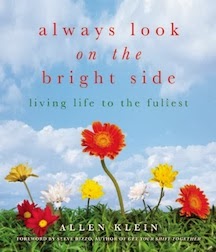