YOU CAN'T RUIN MY DAY: Getting to Know You

Wake-Up Call #1
We must learn to accept life and to accept ourselves with a shrug and a smile . . .
because it’s all we’ve got.
-Harvey Mindess, author
Until you accept things the way they are and realize that you can’t change other people except perhaps by setting an example of how you would like them to be, you will be hard pressed to find a lot of happiness in your life.
If you had a horse, for example, and you wanted to go in one direction and the horse you are riding wants to go in another, sorry folks, but it ain’t gonna work. No amount of pulling or tugging, kicking or screaming, pleading, or prodding will make the horse go where you want it to go if the horse doesn’t want to go there. And, don’t forget, he is much bigger than you. So accepting the place where the horse is headed is easier.
To be a contented, and have a great day every day, you need to accept other people as they are, not the way you want them to be. I’m not saying not to try to make the world better. But it is useless to keep knocking your head against the wall trying to change things that can’t be changed.
Wake-Up:
Every time you encounter someone who upsets you, stop and ask yourself, “What is it that annoys me about that person? Chances are that quality that you don't like is something you also have or you probably would not have noticed it in someone else. It is probably something you also need to accept in yourself.
Lighten Up:
Nasreddin, a satirical Sufi figure, was walking along the street when he sees a mirror lying on the curb.
“Oh! what a waste," says Nasrudin, “a good mirror thrown away like that.”
So he picks it up and looks in it, then he discards it too.
“No wonder they threw the mirror away", he says, "What a face! Who’d want to look at a face like that!”
Posted by Allen at 8:13 PM No comments: 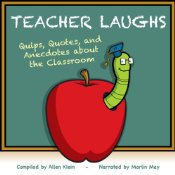 New Reseach: Laughter is Good for the Heart


August 29, 2011 (Paris, France) — A series of studies presented this week here at the European Society of Cardiology (ESC) 2011 Congress highlight the role of laughter, positive thinking, anger, and job stress on developing cardiovascular events. Presenting results during a press conference entitled "Don't worry, be happy," the research had a serious side to it, stressing that anger and job stress are linked to higher cardiovascular event rates, while laughter and cognitive behavior therapy can lower the risk.

Dr Michael Miller (University of Maryland Medical School, Baltimore), the lead investigator of a study examining the link between endothelial function and laughter, said the purpose of his study was to examine the link between positive emotional health achieved through laughter and the subsequent effect on the vasculature.

"We want to maintain good vascular health, and we do that by maintaining a good diet and good regular physical activity, but it turns out that emotions also play an important role here," Miller told the media during a morning press conference. "What we've done in our study is to really promote laughter by showing movies, or segments from Saturday Night Live and other things, to really make people laugh. We appreciate that when we get a good sustained belly laugh, we feel good. That's the point of this--if we feel good, and not just go, 'ha ha,' but get a good belly laugh, does this translate into changes in vascular function?"

In their study, the researchers tested the effects of humorous and stressful movies on endothelial function. Subjects were shown the opening scene of Saving Private Ryan, an intense 15-minute segment that takes place June 6, 1944 and shows Allied forces storming the beach of Normandy. Researchers were also shown segments of There's Something about Mary, Shallow Hal, and Kingpin, all comedies.

After each movie, endothelial function was measured. After watching the scene from Saving Private Ryan, blood vessels constricted by as much as 30% to 50%, whereas vasodilation occurred when investigators measured vascular function in subjects watching the comedies. They also observed that vasoconstriction and vasodilation can occur quickly, with the funny movies reversing blood-vessel contraction that occurred after watching the stressful D-Day scene.

Miller said the vasoconstrictive and vasodilative effects lasted for about an hour, although other researchers have seen the benefits of laughter on vascular function extended to 24 hours. He added that the magnitude of change in the blood vessel is similar to the effects observed with statins and physical activity. "We think the effect is fairly long lasting, considering you're only laughing for about 10 or 15 minutes," said Miller.