The C-Words: Cancer and Comedy


Cancer, schmancer—as long as you're healthy.
-Jewish saying
In my humor and healing presentations, I do an exercise with red clown noses.  Everyone in the audience gets a sealed packet with one inside.  With their eyes closed, I ask audience members to think of some difficulty they are having and then, still with their eyes closed, to open the packet and put on the clown nose.  Then I ask them to open their eyes and look around the room.
I was a little reluctant to do this activity, however, when I addressed the annual meeting of the National Coalition of Cancer Survivorship.  I knew that a number of people in the group had facial cancer.  Some had only a partial nose, some none at all.
I checked with the meeting planner to make sure that the clown-nose-process was appropriate.  She assured me that even those with facial disfigurement would love it.  Still, I was uncomfortable about doing it.  My fears were quickly alleviated, however, when the group not only responded with overwhelming laughter but also delighted in sharing stories with me about their prosthetic noses.
One woman joyfully showed me a Polaroid photo taken in her hotel room minutes before my speech.  She told me that she was getting ready to attend my talk and proceeded to put adhesive glue on her prosthetic nose.  Then she waited for it to dry.  When it came time to attach the nose, however, it was gone.  She could not find it.
At that moment a friend knocked on the door.  So she asked her friend to help locate it.  The nose was finally found and a picture taken.  It showed the nose stuck to her rear-end.
She delighted in telling me the story and in explaining the photo.  But she was even more elated with her new clown nose.  She said, “This is great.  From now on, I have a choice of which nose to wear.”
In Anatole Broyard’s brilliant book, Intoxicated by My Illness, he writes eloquently about being diagnosed with prostate cancer.  One of the striking points he makes is that “Illness is primarily a drama, and it should be possible to enjoy it as well as to suffer it. . . . Illness is not all tragedy.  Much of it is funny.”
TV journalist, and cancer survivor, Linda Ellerbee, knows well about cancer and comedy. She once wrote, “Cancer is serious.  But there are funny things about it too. That summer I bought some breast prostheses to use while swimming.  Instead of fastening them to my skin with Velcro as the directions instructed, I simply inserted the prostheses into my bathing suit.  When I came out of the water, one had migrated around to my back!  Now, how can you not laugh at such a thing? Either you laugh or you cry your eyes out.”
Serious illnesses, like cancer, are not funny. Still, funny things happen. 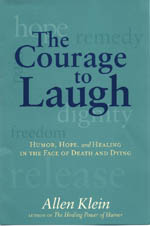 http://www.allenklein.com/courage.jpg
Posted by Allen at 8:24 AM